RTD’s are temperature measuring sensors which uses resistance /temperature relationship of a material to measure temperature of a body. The sensor element is made up of pure materials such as Platinum, Nickel and Copper. RTD’s have higher accuracy and stability as compared to Thermocouples usually in the below 600 °C range.

Platinum is the most preferred material for RTD sensors as unlike other elements it possesses highly linear Resistance – Temperature relationship which is repeatable within a wide temperature range. This linear temperature ranges from (-272.5) °C – (961.78) °C. Platinum is also preferred due to its chemical inertness which makes it ideal to use under any environment.

The sensors made for the International Temperature Scale standard (ITS-90) are also Platinum sensors.

°C, which makes it unreliable for higher temperatures.

The linear approximation of resistance vs temperature is taken between 0 °C – 100 °C.

ΔT is the temperature difference

The value of α is varied by a process called doping in which impurities are fused into the molecular lattice of Platinum in a controlled fashion.

RTD elements are also available with resistances 200, 500 and 1000 Ω at 0°C. Such type of RTDs are known as PT200, PT500 and PT1000 respectively. The temperature coefficients of these types are also same as the PT100, but these provide higher resistance change per degree Celsius which in turn gives higher resolution.

• Class A: This is considered to have high accuracy and has an ice pointtolerance of ±0.06 ohms.

• Class B: This has a lower accuracy and an ice mantle tolerance of ±0.12 ohms. The accuracy of an RTD decreases with increase in temperature.

The European standard or the DIN standard is considered as the world-wide standard for Platinum RTDs.

This standard is also called DIN/IEC 60751 It states that the electrical resistance of a RTD should be 100.00 Ω at 0°C and the temperature coefficient of Resistance should be

• Standard Platinum RTD (SPRT): These are special set of PRTs which are used to perform the interpolation according to the International Temperature Scale of 1990(ITS-90) fixed reference points which ranges from 13.8033K (Triple point of Hydrogen) to 1244.93K (Freezing point ofsilver).

The two wire RTD is the simplest wire configuration. One wire is attached to each side of the element. A measure can be taken by any device equipped to measure resistance, including basic Volt Ohm Meters (VOM). However this is the least accurate way of measuring temperature due the fact that the lead wire resistance is in series with the sensing element. The longer the lead wire greater will be the effect on resistance.

This is the most popular configuration for use in industrial applications. In order to minimize the effects of the lead resistances, a three wire configuration can be used. Using this the two leads of the sensor are on the adjoining arms. There is a lead resistance in each arm of the bridge so

that the resistance is cancelled out, so long as the two lead resistances are accurately the same. This configuration allows upto 600 m of cable.

This is the most accurate method for measuring Resistance of a RTD. It is mostly used in Precision Laboratories and is seldom used in industries. This configuration increases the accuracy and reliability of the resistance being measured, the resistance due the lead wire in this case is null.

wires. A constant current is passed through L1 and L4, L2 and L3 measure the voltage drop across the RTD element. The color code for this configuration is 2 red and 2 white wires.

Why do we need Tube skin temperature measurements? To determine accurate temperature data...

Multi-point thermocouples are used to measure more than one temperature point through a...

Swaged tip thermocouple is special-purpose thermocouples in which thermal sensing element area is... 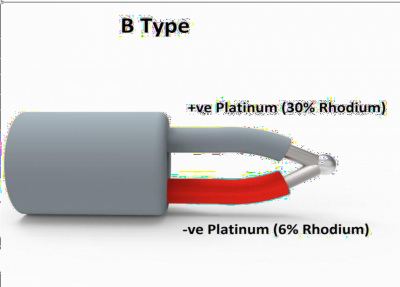