Temperature can be measured through various types of sensors; all of them run on the same basic principle that they give temperature in the output according to the changes produced in their physical characteristics in the input.

According to the type of application, measurement of temperature can be divided into following parts:

The advantage of this type of instrument is that they are portable and they do not need a power supply.

And the disadvantages of this type of instrument are that they are not as accurate as other devices and they do not readily lend themselves to temperature recording. 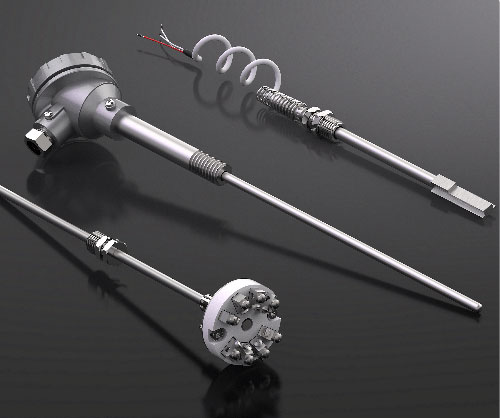 Filled system thermometer simply means that they are filled with any of the substitute. They generally come in two main classifications: the mercury type and the organic-liquid type. Since, mercury is considered an environmental hazard, so there are regulations governing the shipment of that type of devices that contain it. Now a day, there are filled system thermometers which employ gas instead of liquids.

As the name implies

In the majority of industrial and laboratory processes the measurement point is usually far from the indicating or controlling instrument. This may be due to necessity (e.g. an adverse environment) or convenience (e.g. centralized data acquisition).Therefore; Devices are required which convert temperature in to another form of signal, usually electrical quantities. The most common devices used in these types of temperature instruments are (a) thermocouples, (b) resistance thermometers and (c) thermistors, the similarity is, all of them require some form of contact with the body (of whose temperature is to be measured), the mode of contact could be immersed or it could be surface, depending on the construction of the sensor and the application where it is used.

Thermocouples essentially comprises of a thermo element (which is a junction of two dissimilar metals) and an appropriate two wire extension lead. A thermocouple operates on the basis of the junction located in the process producing a small voltage, which increases with temperature. It does so on a reasonably stable and repeatable basis.

Resistance thermometer utilizes a precision resistor, the resistance (Ohms) value of which increases with temperature. RTD has had positive temperature coefficient. Such variations are very stable and precisely repeatable.

Thermistor is a semiconductor used as a temperature sensor. It is manufactured from a mixture of metal oxides pressed into a bead, wafer or other shape. The bead is heated under the pressure at high temperatures and then encapsulated with epoxy or glass. Beads can be very small, less than 1 mm in some cases.

Because they are semiconductors, thermistors are more susceptible to permanent decalibration at high temperatures than are RTD's or thermocouple. The use of thermistors is generally limited to a few hundred degree Celsius and manufacturers warn that extended exposures even well below maximum operating limits will cause the thermistor to drift out of its specified tolerance.

Thermistors can be made very small which means they will respond quickly to temperature changes. It also means that their small thermal mass makes them especially susceptible to self-heating errors. Thermistors are good deal more fragile than RTD's or thermocouple and they must be carefully mounted to avoid crushing or bond separation.

The term infra red radiation is also in use because the wavelength of the majority of this radiation lies in the electromagnetic spectrum above the visible red light which is in the infra red region.

Similar to the radio broadcasting where emitted energy from a transmitter is captured by a receiver via an antenna and then transformed into sound waves, the emitted heat radiation of an object is received by detecting devices and transformed into electric signals, and in this way the temperature of an object is measured through non contact temperature measuring instruments