Black Body is the most ideal calibrator of an infrared thermometer. This is because blackbodies have an Emissivity equal to 1.000.

A perfect blackbody only would have an emissivity of 1.000. This would take place in a system where no light or radiation could escape and all the radiation shall remain inside forever. In the real world, there is no such thing as a perfect blackbody for IR thermometry. This is because there would be no opening for taking a measurement in such a system. However, the perfect blackbody is a good prototype for modeling thermal radiation.

IR thermometers make use of this. They measure the amount of energy radiated by an object in an infrared band. This infrared band can vary from 1 micro meter to 14 micro meters. Depending on the wavelength range IR thermometers uses different types of sensors to determine the temperature. They calculate temperature based on this measured power and the material’s emissivity.

Emissivity is one of the major sources of error in infrared measurements. Knowledge of the emissivity of the measured surface is of great value to any user of an IR thermometer. As so, great care should be taken to know the effects of emissivity of the surface when measuring it. Deviation in the assumed emissivity of the measuring target body would lead to significant error in temperature measurement. Proper knowledge of emissivity and background temperature should be considered when measuring a surface temperature. These factors are even more important when using an IR thermometer calibrator. Paying attention to these factors will provide a better calibration and better IR metrology.

The mathematical equation describing the spectral power radiated by a perfect blackbody for a given wavelength is Planck's Law. If Planck's Law is integrated over the entire electro-magnetic spectrum, this gives us the Stefan-Boltzmann Law. This is the familiar T to the 4th law (T4). The problem with the Stefan- Boltzmann Law is that it is not limited to a specific band. To get such a number, we would need to integrate Planck's Law for the limits of this bandwidth. This integral cannot be solved analytically. 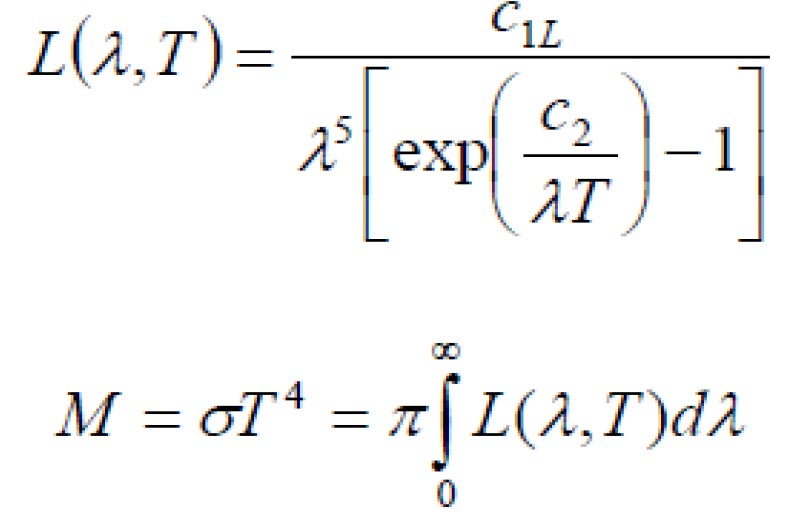 Practically, there is no such thing as perfect blackbody in real world. Manufactures of Black bodies make different shapes and geometries which can be used or which can act as near perfect blackbody. A near perfect Black Body will have its emissivity close to 1 but not exactly equal to 1. A good approximation of a perfect blackbody is a cavity. A cavity can have different shapes; it can be a sphere, cylinder, cone or a combination of these. It must have a well controlled uniform temperature on its surfaces. The total emissivity of a cavity depends on its geometry, but is generally close to 1.000. Cavities will typically have an emissivity of 0.99, 0.999 etc. In simple terms we can understand that as emissivity is more close to 1, it acts as a better approximation for a perfect Black Body. A cavity is not always the best for all types of IR thermometers, especially handheld instruments. This is due to the optical scheme of these instruments. For an error free measurement the spot size of the IR thermometer should lie inside the radiating area. The spot size is the amount of area the IR thermometer sees when measuring temperature on a surface. Surface Black bodies are made which have a large surface area radiating energy and the whole surface is very uniform in terms of temperature and emissivity.

Many charts can be found which lists the emissivity of various materials. These are good guides when looking for emissive properties of materials, but they do not tell us the correct value always because most material’s emissivity varies with wavelength. In other words, materials have a spectral emissivity response. An IR thermometer integrates the emissivity within its bandwidth. One study showed that the emissivity in the 8 - 14μm band varied between 0.90 and 0.97 with a dependence on wavelength. Other studies show a similar range of emissivities. Effect of Temperature Emissivity can also vary with temperature. The other effect that temperature can have is as temperature changes, the amount of energy measure by the IR thermometer shifts within the band. As temperature rises, the energy emitted by the surface shifts from the higher to the lower wavelengths as predicted by the Wien's Displacement Law. This causes the effective emissivity the IR thermometer measures to shift from that of the higher end of the bandwidth to that of the lower end as temperature rises.

The Black Bodies available with us for different temperature ranges are as follows: 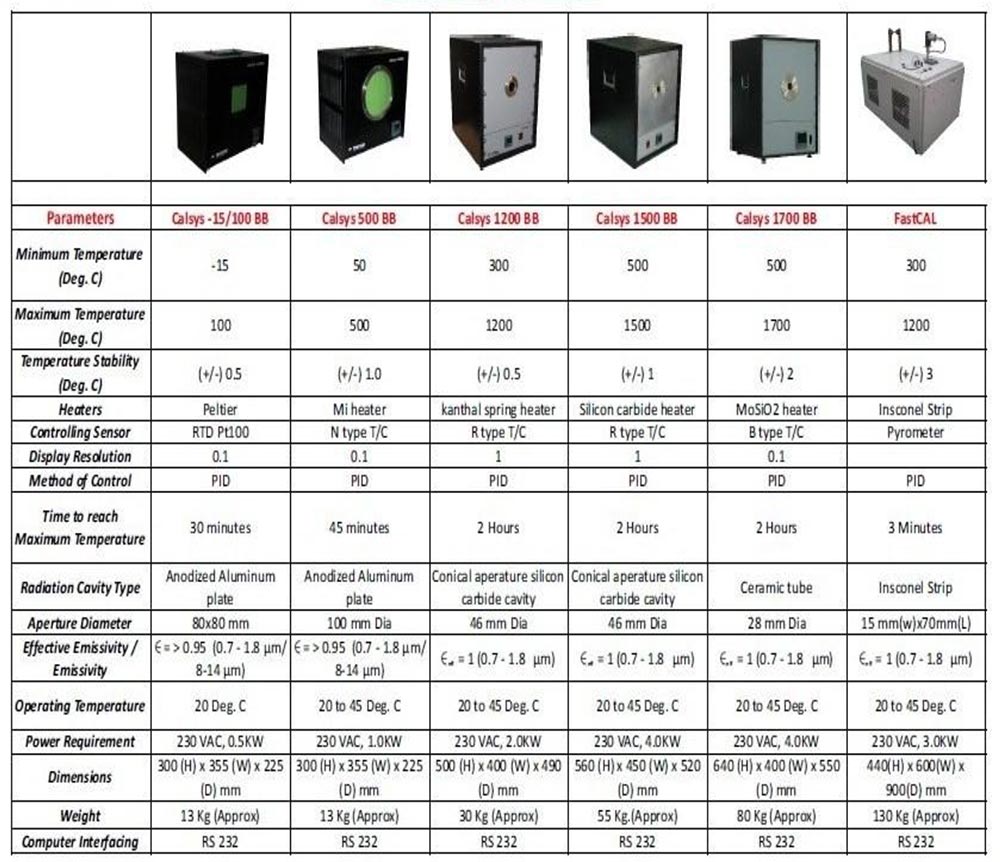